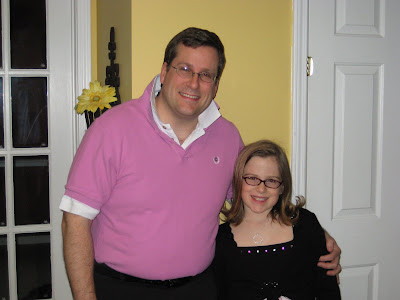 Last night Courtney and I went to the Girl Scout Dad and Daughter dance. The theme was 50's to 80's and everyone was encouraged to dress up.

Being a child of the 80's I knew the style I wanted, I just didn't have the clothes! I couldn't find any suit jackets that were white or pink. Nor could I find my old boat shoes (must have left them at a fight?).

So I settled for a pink izod shirt, over a white izod shirt, black chino's and shoes. Unfortunately I don't have white high tops any more. I also couldn't find my skinny black tie. I'm sure Deb has hidden all of these things.

Courtney had a very nice dress that would have fit into the 80s. Except she wouldn't let Deb 'poof' her hair. She did look very cute.

We first went to dinner at Chili's then to the dance. She and I danced to a lot of songs including some from the 50's 60's and 70's. (They didn't do a lot of 80's music.) We also did the Chicken Dance and the 'stomp' thing they do in school (The one where you 'slide to the right')

Most of the girls were dressed up and a bunch of the Dads. One was Steve Perry, there were lots of hippies, a couple of skinny tie'd and lots of 50's greasers.

I don't know which was funnier: Courtney's look during 'play that funky music white boy' or 'Shout' (Animal House) where we were on the floor.

After the dance she was of course hungry, so we had to get desert. On the way I was clicking through the radio stations and Aqualung by Jethro Tull came on. I started singing and, in an attitude only an 11 year old can pull off, she said 'Um okay Dad. Are we there yet?'
Posted by Chris Curtin at 1/25/2009 07:48:00 AM 1 comment:

Misguided 'environmental' idea and the next round of stimulus welfare

Our friends in Congress are again trying to use the economy problems that they created to push their environmentalist agenda. While I support helping the environment, dumping my tax dollars into a poorly thought out, ripe for fraud plan is unacceptable.

I'm talking about the 'cash for clunkers' plan that the Senate Democrats are trying to stick into the next round of welfare, I mean stimulus plan.

Basically, if you turn in a junker car, which doesn't necessarily have to be running, Congress will give you thousands towards a new car. California tried this in the 90s and it failed, so why does Congress think it will work now?

If you agree that there are better ways of stimulating the economy, without the fraud found when California tried this, please write your Senator and Speaker Pelosi.

From SEMA, some points on what to say in your message.

I am writing to urge lawmakers not to include a "Cash for Clunkers" provision in the economic stimulus bill. Owners who turn in vehicles for crushing would receive a "minimal" payment to purchase a new car. This is a misguided attempt to spur car sales and claim that the country's air quality or fleet fuel mileage is being improved.

* Cars turned in for scrappage often barely run, or are rarely-driven second or third vehicles that have a minimal impact on overall fuel economy or emissions.

* "Cash for Clunkers" programs will reduce the availability of affordable transportation and repair parts used by low-income drivers. It will also compete with the Salvation Army, the Purple Heart and other charities that rely on vehicle donations to raise money.

* "Cash for Clunkers" ignores better policy options. If Congress wants to act, support for repair and upgrade is a better choice and a win-win for consumers, dealers, manufacturers and repair shops. Significant emissions and fuel economy improvements can be achieved in older vehicles through relatively simple and inexpensive means: repaired/replaced exhaust systems, tune-ups, etc.

* I hope I can count on you to reject "Cash for Clunkers." Thank you for your consideration on this very important matter.

I was finally able to get Deb her Christmas present last weekend, and instead of an iPhone I bought her a Blackjack II. It fit her needs better than the iPhone. Plus it was a lot less ;-)

One issue though: the battery lasted less than 12 hours. Not good for a mom on the run chasing a Toddler, a Tweener and a Teenager.

I looked around and found the problem on an obscure site. The issue was the 'beam' feature of the phone was sucking lots of battery power. This is the feature that allows someone to 'beam' you their contacts from their phone. Since Deb stopped going to bars without me, she doesn't need that any more.

I don't know where they get the idea of messing with the cake. She is a serious shoe girl. She got 2 pairs of boots. Silver lining on being older?

While putting gas in the mini-van (No, having a mini-van isn't a good part of being older. stop it) it started raining pretty hard. I just put in the credit card, filled up and looked around. I don't care it was raining, the pumps were under a roof.

A young man, late teens probably, got out of his car and ran into the store, getting soaked in the process, to pay cash for his gas. Then ran back out. I'm still dry watching him.

I remember being that kid running into the gas station because I didn't have a credit card. So chalk one up for a good credit rating ;-)

I remember my Dad always used to say something along the lines of 'old age, experience and trickery will out smart youth and energy'. I guess I'm starting to understand what he used to mean.
Posted by Chris Curtin at 1/10/2009 05:14:00 PM 1 comment:

Yeah, when I was I kid we had to go on the roof to move the antenna to watch TV!

With all the talk about over the air digital TV I had some strange memories of watching TV via an antenna as a kid today.

First, I remember my dad going to radio shack to buy one of these on the roof antennas. But not just any antenna, one that had a motor on it. I don't remember exactly why we did this, but I suspect it was because we needed to watch the Giants.

Next I had to help my dad put it on the roof, attached to the fireplace. And not fall off.

We also had to run a ground wire. I remember Patrick joking about the ground wire for some reason, pretending to be electrocuted.

Anyway, this thing was the balls for the 1970s. When you turned on the TV, you could move the dial that went 359 degrees around and it would move the antenna the same degrees. So you'd start with the TV on the football game you wanted to watch, then turn the knob until the picture got good then turn it back when it went bad. I remember fighting over which position was 'best' for a particular channel.

Anyway, as more people are trying to get HDTV over the airwaves I have to wonder if these antennas are coming back.