Yes, I said RED. Actually, it is half red and half white. All polka dots though. And turtles. It is good to be a boy. Yes, I've mentioned that a few times before.

Being a car guy myself, I expect Christopher to continue the tradition. No not that tradition, the one about liking cars.

My good friend Roger is a woodworking master. He's built cabinets for me and unbelievable things for other people. So when I mentioned we were thinking about getting Christopher a car bed, he told me he'd build one instead.

So a few weeks ago, on one of the coldest Friday's so far this year, he and I cut 2 sheets of MDF into a race car bed. It took a while for me to get it painted, but here it is. Yes, that is grey primer. No, I wasn't going to leave the car in primer. It's supposed to be a Mustang, not a Bitchin' Camaro.

Cheerleaders and Beer - too bad they're from Dallas

So, being a geek, I am frequently asked to help people fix their computers, or for advice when buying a new one or generally about computer stuff.

From Facebook, MySpace, removing viruses, you name it, I help. For a fee.

Now, the fee is usually pretty reasonable depending on the work. Sometimes it is the beer I drink while at their house, often it is a 6 pack or sometimes a case. Of course, I'm as likely to drink it with the 'payee' when they come to drop it off. Bartering is also helpful for things like book cases, beds, car parts etc.

After Christmas I helped a good friend's son buy a wireless router, XBOX 360 NIC and setup their home network. This is a 6 pack or maybe 2 type of job. The other day his father (who is also Christopher's Godfather) brought over a case of beer. I was at work so I didn't think anything of it. Until Deb asked me if I had looked at it.

Here is what was on the top: When I actually opened it, several of the bottles had pictures on them (click on the image below for a better picture). Did I mention that Joe is Dallas Cowboy fan? This was also the night before the divisional game with the Giants against the Cowboys.

Right at Kick off Joe came over for a beer, so I have him a Cheerleader ;-)

About the same time the Cowboy's cheerleaders were on TV so I said 'Christopher! Look! Cheerleaders!' He stopped playing, looked up at the TV and watched until they changed back to the game. Deb was PISSED at me for that.

If you're a parent you've been bombarded with the PSAs for 'Read with your kids'. We've always read with the girls, from 'Good night Moon' to 'Guess how much I love you'. Well, my family also believes in reading, but they have some strange choices in books.


A couple of years ago my Dad got the girls 'Walter the Farting Dog'. See here. It is actually a pretty good book.

The other day a gift arrived from Kerry for Christopher. It wasn't his birthday yet, but I guess she saw it and thought of Pat. The card read:
'Dear Christopher, Since girls "don't do this", you must carry the mantle. Here is your guide. When you are ready you can meet master Yoda-Grand-Dad in Bethel who will explain the rest.
Love Aunt Kerry'.
The book:
'The Gas We Pass'

For what it’s worth, none of the Giants’ offensive linemen will be wearing sleeves on Sunday night. No matter what.

“You can’t wear sleeves,” said Grey Ruegamer, who used to play for the Packers. “That’s bull——. That’s for the skill guys to wear.”

I remember playing football at Immaculate and having Mr. Dunleavy make lots of nasty comments about the running backs/quarterbacks and receivers. I thought of him when I saw this.
Posted by Chris Curtin at 1/16/2008 03:44:00 PM 1 comment:

Yes, and there were witnesses.

10 years ago, with Deb 8 months pregnant, 1 month before Courtney was born, my family is in GA for Christmas. Deb tells John and Pat 'NO STUFFED ANIMALS'. See, they had bought several very large toys each year previously, including a 3 foot tall Tigger and we didn't have any place to put them.

So, they come in the house, thinking they are sneaking in, with a huge stuffed 101 Dalmation dog. Deb comes down and sees it and drops the f-bomb. I think Patrick passed out and John ran outside to hide.

I always said we'd get them back someday. So when Anna was born, JC Penney had a huge stuffed animal on sale, so we had to send it to her. Payback is a bitch and it's only starting ... 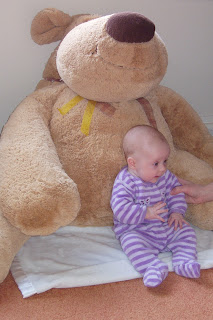 Courtney turned 10 yesterday. The big 'double digit' milestone. Thank god it is not 13 yet.

We had a nice family dinner and opened presents and had cake.

Meghan made the cake and it came out great. One of her presents was her room painted white and red. I didn't take any pictures since the red paint didn't come out exactly how we wanted. Plus the turtle is still being painted on the wall (I'll post up pictures of that when it is done.) Let's just say it is totally Courtney!
Posted by Chris Curtin at 1/15/2008 07:33:00 PM 1 comment:

Wow, what a game, heck, what a series of wins (yeah Ris, I know the Patriots won).

My Dad doesn't know what to do. First we beat the Cowboys, next are the Packers. I don't know who Dad hates more.

Did anyone else note the statistic from the game? The Cowboys and Giants were tied for the most number of post season apperiances in franchise history at 29. The key here is 'were'. Next week in Green Bay the Giants will set the record.

Last night we were at Lowe's getting the RED paint for Courtney's room, when Deb gave Christopher 2 wooden paint stirrers. He immediately started banging on the cart with both, with both hands, almost in rhythm.

Maybe I'll call him Bonham from now on.

Consumer Electronics Show and a universal remote - wish I'd thought of that!

No, I didn't think of this, but it is an hysterical idea.

All those TVs, one universal remote. Let the fun begin!

I told the girls about this at dinner tonight and they all started laughing. Seems for Christmas we got them both the save DVD player. So on their long trip from CT to GA, Courtney was messing with Meghan by pointing her remote control at Meghan's player. Sorry it took so long. With Deb going to CT and getting back into the swing of school with the girls it has been a little bit busy.

Christmas was a lot of fun. Christopher still doesn't understand what is going on, so he really didn't trash the place. He probably will next year. It was snowing in CT, so the kids were able to see snow, but it didn't snow enough for them to really play in it.

Christopher was playing with his uncles and met his cousin Anna. Sorry no Christmas or New Year's pictures yet. It's been a busy couple of weeks.

As has become tradition, Deb packed up the kids and headed North to see the Grandparents and the rest of the family. So far things are going well based on the stories I've heard.

Meanwhile, I've been home working and doing things around the house. I took about 10 of the big projects off the 'honey-do' list. Lots of painting, fixing annoying things and a few surprises for Deb when she gets home.

The big items:
- painted all the ceilings upstairs except for Meghan and Christopher's rooms.
- primed Courtney's walls. Painted the trim (will paint 2 of the walls white tomorrow, other 2 will be painted when she picks the colors)
- with Roger's help hung the TV on the wall above the mantel (pictures coming soon)
- with Roger's help cut out the wood for Christopher's race-car bed (I started priming it today)
- Got Alden's xbox working online with a new router

Honestly, Roger did all the work for hanging the TV and cutting out the bed parts. Damn he has a nice shop! Just needs a 4 post auto lift in there ...